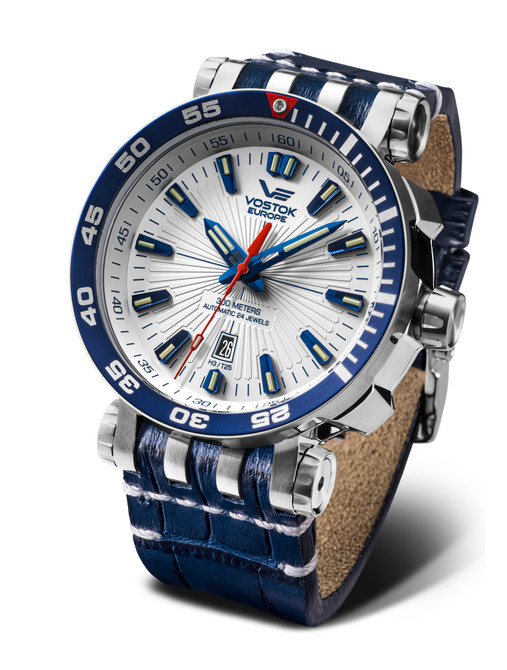 Description
The Vostok-Europe Energia has landed. Or, more accurately, taken off. Or maybe even more accurately you won't want to take it off your wrist.
Inspired by the world's most powerful rocket system, the Energia is the latest from Vostok-Europe. The design on this new model is a distinctive break from their previous releases and a major departure from the most recent Almaz and Mriya models.
It's a beefy watch, like it's namesake, at 49 mm and 17 mm thick and has features Vostok-Europe has never offered before. Based in Vilnius, Lithuania, Vostok-Europe is a boutique watch brand that hand assembles every piece at their own facility and customs designs every watch from the ground up.
The Energia is the first Vostok-Europe to place the constant illumination tritium tubes in a v-shaped reflective holder for maximum illumination -- similar to a solar reflector. This model is also the first to offer sapphire capsule encased tritium "dot" on the rotating bezel for better visibility for elapsed time measurement.
This new model also come with a newly designed dry box case that will perfectly hold the Energia and it's two straps and tools or can be easily converted into a 4 piece collector's carrying case.
Other features include 30 ATM water resistance, automatic helium release valve, automatic NH35 movement from SII and two, 26 mm straps -- one leather and one silicon.
Shipping & Returns