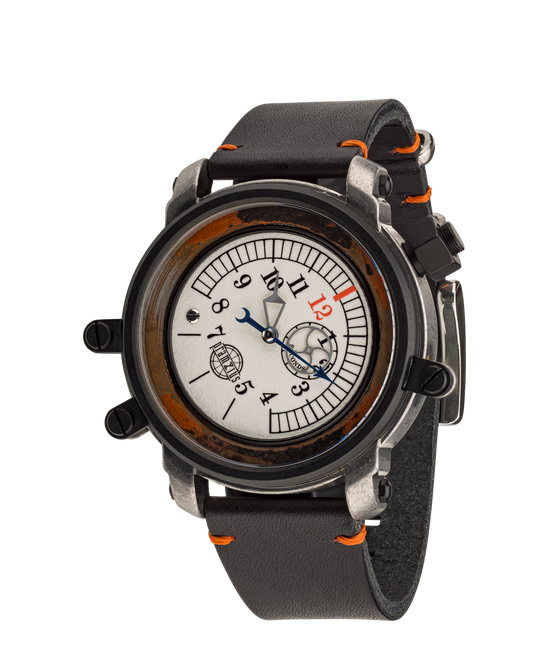 General information There is something about trains and watches -- something that inexorably ties one to the other. Accuracy, reliability, …

There is something about trains and watches -- something that inexorably ties one to the other. Accuracy, reliability, beauty and brawn infuse the great locomotive and her sister timepiece. It's about much more than just getting there on time. It's about getting there in style. The Pramzius Gauge master brings you both in one unexpectedly unique package.

With genuine metal from 1800s and 1900s locomotives constructing the outer dial, put the Gauge Master on your wrist and bring the locomotive with you wherever you may roam. You'll feel the steam, hear the whistle and swear that "all aboard" is about to ring throughout the station. The inner dial is inspired by a manometer gauge from locomotives of the VVT train museum -- Vapeur Val-de-Travers -- of St-Sulpice Switzerland. As the museum's official timepiece, every aspect of the Gauge Master speaks to a component of trains or train lore. The dial and case being directly inspired from equipment of trains that once roamed the Baltic region as well as Swiss engines. This and the Swedish leather straps tie the Gauge Master back to the Baltic heritage of Pramzius.

The Gauge Master brings together an eclectic mix of timekeeping elements to create a watch that looks like nothing else out there. While inspired by the manometer gauge, the elements of the watch go far beyond a simple repeat of the gauge's appearance. Another signature element of the Gauge Master is the askew dial. This configuration, seen in other train watches (we didn't invent this wheel) is designed for engineers who use levers and pulleys rather than a steering wheel. This allows them to quickly glance at the time without having to move their wrist and risk inadvertently moving a lever in the process. The exterior screws on the case are reminiscent of the mounting screws of gauges in the locomotive's engine compartment. The sub-second hand is directly inspired by the valve control wheels also found in the engine compartments.

Two of the executions come with fully luminous dials that will split the dark even on the foggiest of adventures. We use only Swiss Superluminova brand lume in 15 individual silk screen layers to truly split the dark. The tumbled stainless steel case offers a look as if the watch came directly from the past. And the exhibition caseback highlights the mechanics of the watch and is historical inspirations. The logo of the VVT train museum is also proudly etched on the exhibition caseback of the watch which displays the Miyota 82S5 sub second automatic movement, which powers the Gauge Master. The crystal is sapphire and the watch is rated to 10 ATM water resistance, which is unusual for a train-related watch. We wanted the quality of construction that comes along with that level of water resistance. Put the Gauge Master on your wrist and step back in time.