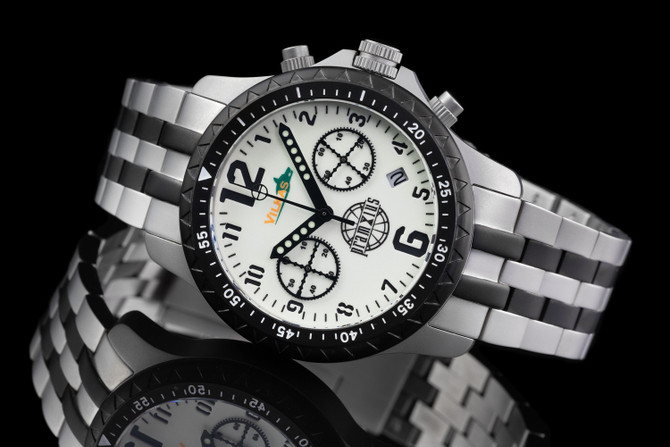 General information A Medieval legend, a modern military machine and the watch that brings modernity and antiquity together. The Pramzius I…

Description
General information
A Medieval legend, a modern military machine and the watch that brings modernity and antiquity together. The Pramzius Iron Wolf watch tells the circa 720 year-old-story of the founding of Vilnius, Lithuania and brings to bear a watch ready to be the official timekeeper of the Wolf Infantry Fighting Vehicle of Lithuania’s modern NATO ground forces.
Pramzius brings back military meets elegant and offers a timepiece truly worthy of legend and a new legend in the field. Tactical watches with precision chronographs, and open-heart automatics that offer mother of peart and full lume dials are just the beginning. Every aspect of the Iron Wolf ties back to the legend and the vehicle it represents. Anti-reflective sapphire crystal protecting a 10 ATM 316l stainless steel military-grade timepiece with unidirectional rotating bezel marked off by the teeth of the wolf, sandwich dial options, and custom-made art on the case back inspired by the Iron Wolf legend are just some of the features of this exceptional timepiece.
Because legends are made; not born. Roughly 720 years ago the Grand Duke Gediminas stopped to take a rest near the Vilnia River after a successful day of hunting. He fell into a deep sleep and dreamt of a mighty Iron Wolf standing firm on the crest of a hill and baying with the strength of a hundred wolves. When he woke, he sought the council of his priest to interpret the dream and he told him this:
"What is destined for the ruler and the State of Lithuania, is thus: The Iron Wolf represents a castle and a city which will be established by you on this site. This city will be the capital of the Lithuanian lands and the dwelling of their rulers, and the glory of their deeds shall echo throughout the world."
And so, it was as Gediminas founded the great city of Vilnius named for the Vilna river.
The legend of The Iron Wolf is engrained into the history of Lithuania and its national pride. So, it made perfect sense when the Lithuanian military sought a new IFV for its ground forces the vehicle be named The Wolf. And after 15 years of importing watches from Lithuania, building a true military timepiece inspired by the ancient legend and the peacekeeping field vehicle of today was all but inevitable.as founded the great city of Vilnius named for the Vilna river.
The teeth on the rotating bezel are the bite of the Iron Wolf. Gunsights on the fully functional sub dials and on the second hand on the chrono speak to the Wolf Fighting Vehicle along with the gun turret embedded in the crown. The official logo of the Wolf vehicle is on the dial of every execution.
Once you put The Iron Wolf on your wrist, you will understand how new legends come to be.
Movement
Watch case
Strap
Content